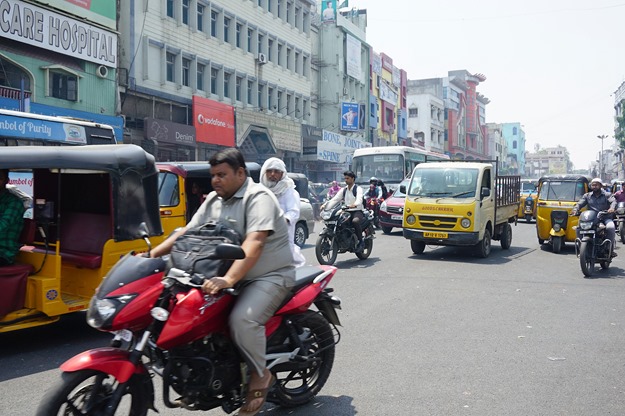 Today was the first day in Hyderabad and I was fighting jet lag.  I thought that a run might help me get through the rest of the day so I could sleep through the night. 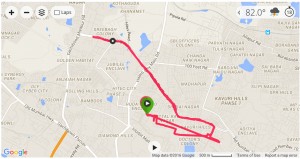 I went out to MapMyRun to try to find a run, but I couldn’t find any runs around The Westin Mindspace in Hitec city.

While searching for a run in my area I found a blog post about running at the University of Hyderabad, so I used Google Maps to see the distance from the Westin to the University of Hyderabad.  Once I mapped out the destination I changed the mode of transportation to walk and it showed about 7.7 km, around a 15 km run round trip – about the distance I wanted to run.  The directions were pretty easy (so I thought), only having to run on three major roads.

I filled my Camelbak with bottled water (I didn’t want to get a case of Delhi Belly from drinking unfiltered water) and set out on the run.  Below are a few observations I had about running in India:

Don’t Run if You’ve Got a Delicate Constitution 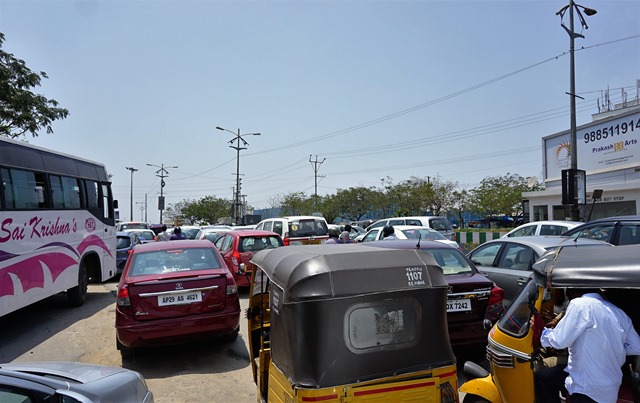 It’s a harrowing experience to run on a crowded road in India.  There’s a lot of chaos on the roads.  Cars are going everywhere, motorcycles are weaving in and out of traffic, fitting in any space available.  Rickshaws are pulling over to just hang out or to pick up passengers.  It’s crazy.  Several times I encountered motorcycles and rickshaws driving the wrong way on what little shoulder there was.  People walk everywhere and aim to occupy every space available.  You really have to be alert when running.

There’s a lot of smells out there.  I almost got queasy a couple of times from the smell of:

I encountered several dogs on my run.  I slowed my run to a walk when I saw my first dog.  I’ve learned to do this so they won’t chase me.  However, the Indian dogs had no interest in my whatsoever.  It didn’t even look at me…

The second dog I came across was navigating traffic.  I thought it was going to get hit by a car, but it managed to cross the road brilliantly without anyone’s help.

This is more necessary when you are running against traffic.  When running against the traffic a lot of dust gets kicked up and gets in your eyes.  I saw several people with sunglasses on and bandannas on their faces to keep the dust out when they were walking or riding motorcycles.

Even though they honk a lot, a whole lot, and they are all over the road, the drivers in Hyderabad were very skilled.  I didn’t see a single accident out of thousands of near accidents.  They are confident in their driving abilities and really know what they are doing.

First I ran with traffic and was always looking over my shoulder for cars behind me. I learned to listen to the nearby horns and maintain my line without making any erratic movements. I should note that even though most of the roads are one way, that doesn’t stop the locals from driving against traffic on the shoulders. This complicated my run since I had to be looking every which way to ensure I wouldn’t run into anything or get run into. I eventually learned to focus on what was in front of me and only look back when passing something would put me into the traffic lane.

I ran an out and back, so I got to experience the traffic both ways. I found it easier to run against the traffic and just keep track of the cars coming behind me going the wrong way than to focus on the cars coming up behind me when I was running with traffic, although I did have much more sand and dirt getting in my eyes .

I saw several holes in the sidewalk and the road that were a couple of feet deep.  There were also dogs laying in the middle of the sidewalk that I could have easily stepped on.

Keep Some Speed in Your Legs

With all of the traffic it became obvious that I might need a boost of speed to get out of the way of something, so I made sure not to run all out.  This proved helpful on a couple of occasions when crossing side roads and major intersections.

The traffic in Hyderabad is a finely tuned machine that seems to almost be orchestrated.  It’s important for the drivers to be able to anticipate your intentions so they can anticipate them and act accordingly.  I made sure not to do any crazy zigzags or sudden changes of directions so the cars would know where I was going.

I wrote down the road names, turns and distance to the next turn using Google Maps.  I also wrote down the number of roads I would pass until my next turn for the minor roads.  I figured the major roads would be marked and I wouldn’t need to know how many roads in between, just an approximate distance would work.  I’ve used this system many times to run in the U.S, without fail.  I usually start with using my GPS on my phone and then switch over to my notes in my pocket if I have poor cell or data service.  It’s nice to have the notes to fall back on.

My navigation plan was an epic fail.  First of all, I didn’t have cell phone or data coverage.  So I switched over to my notecards.  I realized this wouldnâ€™t work when the first turn I took was a dead end.  It turns out that Google Maps only had the major roads shown and not the minor ones, so I had to navigate by using my general sense of direction.   I knew the direction I needed to go to hit the first major road and if I kept running in that direction I would run into it eventually, which I did.

Once I hit the major road I couldnâ€™t find any road signs. I asked several people on the road the name of the road.  I had to ask four people before anyone actually knew it was Hitec City Road.  The gentleman confirmed I was on the right road.  I asked him how to get to the University of Hyderabad and he told me to take a rickshaw.  After laughing I told him that I wanted to run the distance.  He was surprised and told me to keep running to the 2nd major intersection with a stop light and and then ask someone else for directions.

When I got to the second intersection, there were no road signs once again.  The road looked pretty sketchy and was not very well lit so I was not very keen on running down it.  I ran for a while longer on the main road hoping that I might find my turn.  I asked three people for directions and someone finally told me it was at the next intersection.

I ran to the next intersection but, by this time, it was completely dark and I was getting tired after having run 4k so I turned around.  Iâ€™m sure the exhaust fumes and smells were starting to take there toll in addition the the jet lag of the 30 hours of travelling.

On the way back I missed my turns a couple of times since it was dark and most of the roads look the same.  You can see from the image that I retraced my step a few times.  Thank goodness I was wearing my Garmin Forerunner.  I set it up to Return to the Starting Point and just followed the map, which eventually brought me to the hotel exhausted.

I enjoyed my run even though I wasn’t able to find my destination.  It took me a couple of days to recover from breathing all of the exhaust fumes from the 10 Million people living in Hyderabad.  Living in the foothills of Denver,  I donâ€™t usually have to endure so much pollution and it took a toll.